The Friendship of Christ 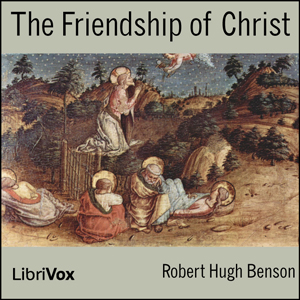 The Friendship of Christ

LibriVox recording of The Friendship of Christ, by Robert Hugh Benson. Read by Dave7. Robert Hugh Benson, who was educated at Eton College and Trinity College, Cambridge, was ordained an Anglican priest in 1895 by his father, the Archbishop of Canterbury. Eight years later, after weighty consideration, Robert Benson converted to Roman Catholicism. In 1904 he was ordained a Roman Catholic priest and took up residence in Cambridge, where he ministered to Roman Catholic students as their unofficial chaplain. In 1911, he was made a monsignor. Despite the brevity of his earthly life, Benson was a prolific writer whose literary productions span the gamut from devotional works, such as The Friendship of Christ, to sacred drama, children's books, apologetic works, historical fiction, and even science fiction. The Friendship of Christ, which bears an imprimatur, is based on sermons Benson preached in London and Rome in 1910 and 1911. In the first part of this book, he shows how one enters into a personal relationship with Jesus Christ through the purgative and illuminative ways. In the second part, he discusses several modes in which Christ offers us His friendship here and now, such as in the Eucharist, in the Church, in the priest, in the saint, in the sinner, in the average person, and in the sufferer. In Part III, Benson recalls how Jesus Christ proved the depth of His friendship with us by willingly accepting death on the cross for our sake, and how He raises His friends to everlasting life with Him. (Introduction by dave7) For further information, including links to online text, reader information, RSS feeds, CD cover or other formats (if available), please go to the LibriVox catalog page for this recording. For more free audio books or to become a volunteer reader, visit LibriVox.org. Download M4B (152MB)